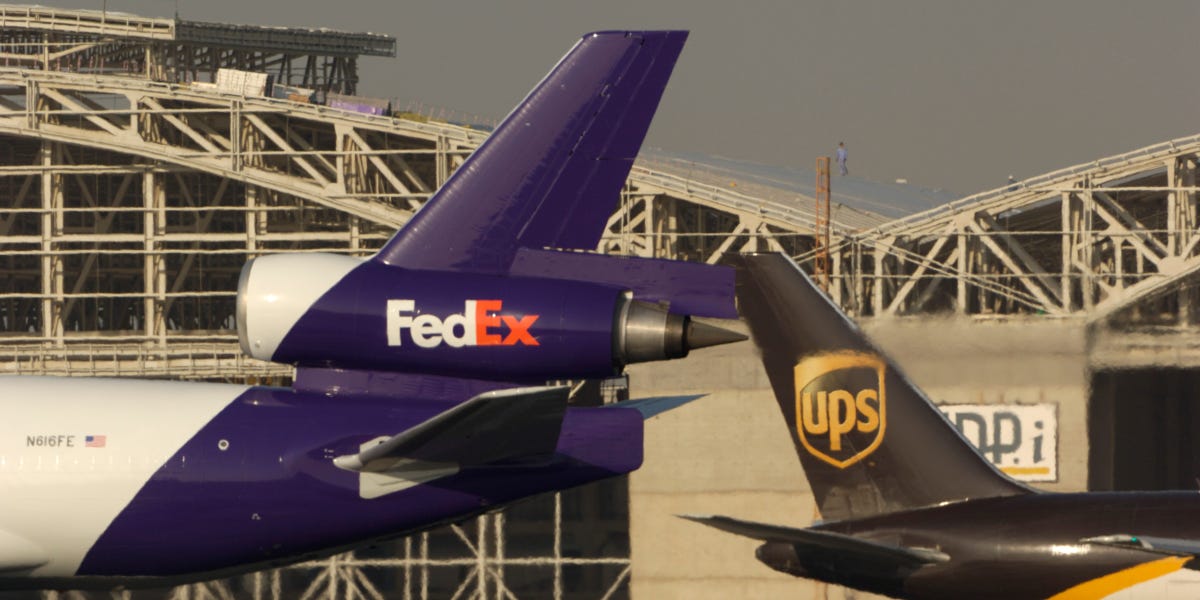 As e-commerce growth slows after the total sprint of 2020 and 2021, delivery companies are waking up to a new reality.

There are fewer packages to go around. The cost of delivering them has increased. But companies still need to grow.

FedEx executives received a central question about the challenge ahead during Thursday’s tense earnings call, in which they outlined how they would climb out of a hole by drastically cutting costs. FedEx also announced an average rate increase of 6.9% in January, the highest on record.

“How do you reconcile the biggest rate increase in your history at a time when your volumes are dropping double digits? I mean, won’t that make the drop in volumes worse?” asked Morgan Stanley analyst Ravi Shanker.

The answer was that they thought their customers were now “sticky” and used to inflation. But there’s a fight coming that will put that idea to the test for FedEx and rival UPS.

For the two delivery giants, staying ahead (or perhaps afloat) now requires winning over small and medium-sized businesses that have less bargaining power and therefore pay near-best rates. These are target customers that both companies have prioritized for years. But in today’s environment, the stakes only increase.

SMBs represent 25% of the market and a key source of growth for these companies, Shanker told Insider. “Every entity in the package delivery market — that is, UPS, FedEx, USPS, Amazon Logistics, and all third parties — is looking to this SMB customer,” Shanker said. “Someone won’t hit their target.”

UPS and FedEx Take Opposite Approaches

Many small e-commerce businesses purchase their shipping services through the online platforms they use to sell their products. Shopify, eBay, BigCommerce and others offer multiple carrier options at the push of a button.

UPS has embraced these platforms for years, in some cases negotiating deals offering discounts to merchants who sell through them.

“UPS saw the platform opportunity five years ago, partnering with Shopify in 2017 and Auctane, formerly known as Stamps.com, in 2019,” said Nate Skiver, a parcel consultant who was previously head of logistics at Gap.

UPS CEO Carol Tomé said these programs are on track to generate $2 billion in revenue this year. In the first quarter, parcels from small businesses grew faster than those from large shippers, Tomé said during the company’s earnings call in April.

FedEx has taken a much more cautious approach.

“We are very selective with the platform partners that we choose because we want to have that direct relationship with the small customer,” said Brie Carere, chief customer officer of FedEx, during the company’s earnings call in March, according to Sentieo.

When an e-commerce business buys shipping through Shopify, for example, the carrier doesn’t own the transaction data, so they can’t analyze that customer’s shipping needs and market to them directly. . FedEx is committed to keeping this element, Carere said.

“When you work with a third party, you end up with a price in a box on an app,” Carere said during the company’s investor presentation in June. “And we don’t think that’s the right way to sell the value and the premium we offer small businesses.”

The stakes of managing the pandemic were already high, as soaring parcel volumes encouraged delivery startups to form and smaller competitors to gear up, creating more competition in the space than UPS and FedEx have. dominated for decades.

They rose last week when FedEx warned that it would deliver first-quarter results far from expectations, suggesting a more dramatic slowdown than expected.

Shanker said FedEx’s intention to avoid competition simply on price was understandable. “They don’t want you to hit the FedEx button because FedEx was the lowest price of the four, which they never will be and they probably shouldn’t be,” he said. “They want you to click on the FedEx logo because you think FedEx is awesome.”

Other analysts said that so far, the downsides of FedEx’s approach outweighed the upsides.

“I think while FedEx is talking about its focus on SMB shippers, I think UPS is actually executing it,” said Rick Watson, CEO of RMW Commerce Consulting.

Dean Maciuba, a 35-year veteran of FedEx who is now a managing partner at Crossroads Parcel Consulting, said the company was “in catch-up mode” when it comes to third-party platforms, suggesting that over time the strategy of Memphis society could evolve.